I met Danielle of Danfredo Photos & Films randomly. One of my writer friends introduced me to Danielle’s blog and I reached out to her to purchase some ad space to promote my second book. During our emails back and forth, we discovered that we literally lived one minute away from each other, so we decided to meet in person. Danielle was easy to fall in love with and she instantly became my friend.

When Danielle and I first met, she hadn't taken the leap into photography just yet, but when she did I was elated that she asked me to be one of her test subjects. Her photos were absolutely incredible! Danielle possessed the natural ability to direct and to snap beautiful candid shots of me mid-laugh after she just cracked a hilarious joke. I would be expecting my face to be contorted into some grotesque expression, but the photo would always be gorgeous! Danielle and her hubby, Wil, giving birth to Danfredo Photos & Films was not a matter of ‘if’, it was a matter of ‘when’.

I reached out to Danfredo the second Edward proposed to me because OF COURSE they would be the ones to document one of the most important events to take place in our lives. Edward and I already knew the date that we planned on getting married, and with less than a year to plan, we can only thank the Lord that they weren’t already booked for our date.

There is a huge level of comfort that comes with having your good friends take control of such an intimate part of your wedding. Because we are all familiar with each other, Edward and I were able to be our true selves in front of the camera instead of a stiff, stuffy married couple that we wouldn't have recognized as ourselves.

I am obsessed with each and every single image that was captured at our wedding, but this is one of my absolute favorites: 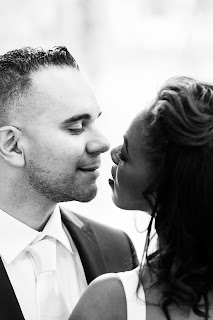 The night that Edward and I received our photos and video from Danfredo, we stayed up (on a school night) until some ridiculous hour in the morning ooh-ing, aah-ing and laughing hysterically at the moments Danfredo documented that we missed because we were busy getting married.

I don't have enough words to justify the range of emotions I experience each time I delve into our photos (which is quite often. I should be embarrassed about this, but I’m not). My heart becomes so full from the love that is displayed. Love from our friends, love from our families, Edward and I’s love for each other and the love that radiated to us from behind the lens. And I am overwhelmed with appreciation of the fact that we get to repeatedly relive one of our most important days due to the immense care and detail that was put into documenting our day.

I’ve falling deeper in love with Danielle, Wil and the entire staff of Danfredo Photos & Films ☺.
Posted by Louise Cazley at 8:07 AM

Email ThisBlogThis!Share to TwitterShare to FacebookShare to Pinterest
Labels: The Wedding Series