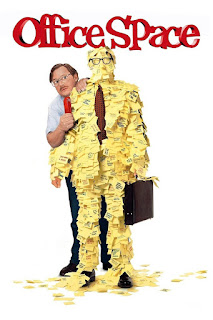 The first Christmas present that my husband gave me when we were dating was a boxed set of Office Space. It included a DVD, a mouse pad, a magnetic picture frame and the famous stapler. I could tell he was excited to give it to me and he promised me that I would appreciate the movie, but I was unenthused and I don’t think I hid my un-enthusiasm well (so ungrateful). The boxed set sat collecting dust on my bookshelf for years, until a day when I was home with nothing to do was in the mood to watch a movie. I finally pulled Office Space from the shelf and, Edward was right, I really enjoyed it.
Lately, Office Space has been on television quite frequently and after recent unfortunate office events of my own, I now have a complete and deep appreciation for this movie. Imagine busting your buns and being overlooked for everything you do. Imagine a coworker doing half of what you do yet receiving the recognition you deserve. Imagine a colleague who didn’t know you or your work ethic being given the power to make decisions on your future within the company. You can’t see me, but there are flames coming out of my nose as I write this. If you’ve ever had your office environment become unrecognizable; if you’ve ever landed in a place in which you were certain you didn’t belong; if you’ve ever experienced undeserving behavior in your workplace this movie will stand with you in solidarity - at least for eighty-nine minutes.
Posted by Louise Cazley at 5:01 PM No comments: 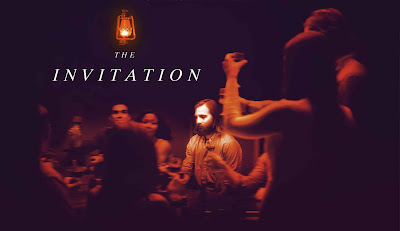 There isn’t much that I love more than throwing a party. My dinner parties have improved over the years in both menu options and bougieness - Pinterest is my downfall. The prep and planning can be so overwhelming and stressful, especially because I like to kill myself by cooking everything from scratch, but the results are always so rewarding! The house smells amazing, the food is delicious and my favorite people are with me enjoying the fruits of my labor.
One of my favorite authors, Bianca Sloane, recommended the movie, The Invitation, so Edward and I checked it out a few weeks ago. We didn’t know what to expect since the description is short and the trailer didn’t reveal much which was great for us. The more suspenseful the better. Although I loved the ambiance of this dinner party and I loved the house where the party was hosted, this is one dinner party I wouldn’t mind losing the invitation to. It was strange, uncomfortable and disturbing at times – BUT if Logan Marshal Green will be there, I would consider making an exception. 😉
https://www.netflix.com/title/80048977
Posted by Louise Cazley at 2:31 PM No comments: