Although I haven’t been to every single restaurant in New York City, I’m pretty sure that Sofrito is one of the best places to eat.

Sofrito was introduced to me by Daisy as one of her Restaurant of the Month picks. I can’t count how many times I have been back or the amount of people I’ve visited Sofrito with, but I can guarantee that each and every one of us walked out stuffed and happy as hell. (I don't want nothing to do with hell, but you know what I mean.) 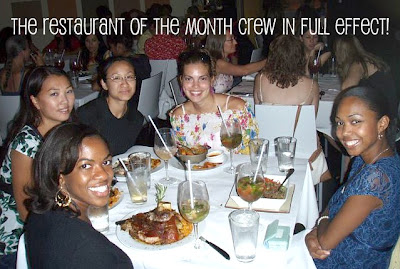 I have soooo many good eating memories from dining at Sofrito. I haven’t been to Sofrito in a while because it is a bit pricey; but you forget about the dollar signs as you are chomping away because the tastes are worth every penny.

There is also an appetizer sampler, which is not on the menu so I can’t say which appetizers are included, but Mmmmm! Everything is so freaking Mmmmm! Even the garlic buttered, pressed bread that you get for free on your table is delish! 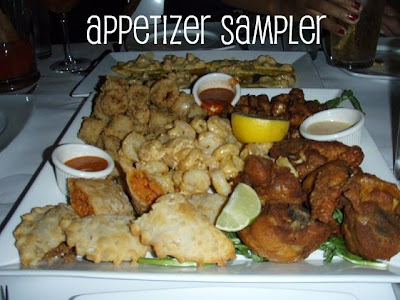 They also serve great cocktails. I’ve had the Sofrito Sangria (Choice of Red or White Wine topped with fresh fruit) and the Sofrito Mojito (Rum, Malibu Passion Fruit, Passion Fruit Juice, Lime and Mint, served with a stick of sugar cane). The Sofrito Mojito is yum! If you are with a group, or with one other person who can put a drink away, it’s worth it to order a pitcher.

Sofrito has a lounge-ish feel. The salsa music is blasting so it is a bit loud. I don’t mind loud at a bar, but at a restaurant I don’t want to have to yell. And you if want to talk to anyone, you will have to talk loud to be heard. But because everything else about this restaurant is so great, I don’t care. I can talk loud for an hour or two. There won’t be much talking once the food arrives anyway.

There is a dress code, which adds to the ‘lounge’ – not ‘restaurant’ feel. I understand this for a club, but not really for a restaurant. Even if you are dressed decently, but happen to be a man who is wearing shorts, they will not let you in. And they don’t open until 5pm Monday - Saturday and 4pm on Sunday (Lounge). But then again, maybe they don’t open until later in the day, because they are busy seasoning, and cooking my pernil.

If you know someone who likes to be fussed over on their birthday (me) Sofrito is a great place for a birthday dinner. The music stops and they play a Latin version of Happy Birthday over the speakers. The entire wait staff comes over clapping and singing; one carrying a dessert adorned with a sparking candle just for you. This can happen about ten times while you are there for other people who you may or may not share a birthday with. I’m sure a lot of people fake the birthday funk.

I’m not sure if they are still doing this, but there was one night when a live cover band was playing. This created more of a mellow atmosphere.

Enjoy, and until next time, happy eating!