There are a few locations, but the location on 34th Street is the one I frequent the most: 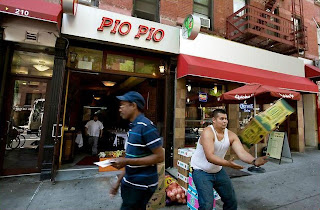 Pio Pio was introduced to me by a friend who shared my devotion to eating, drinking and being merry. She and I spent many Friday nights sipping Pio Pio sangria and talking about naughty things that made explode into alcohol induced laughter. Good times!

Until I visited Pio Pio last night, I’d forgotten just how tasty and savory their food is. Flavorful, moist rotisserie chicken, rice and beans, tostones with a mouth watering garlic sauce for dipping, French fries and sausages… Mmmm. I’ll let you see for yourselves. 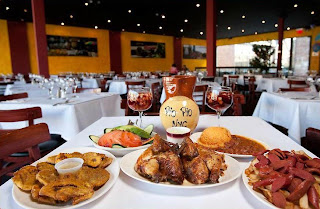 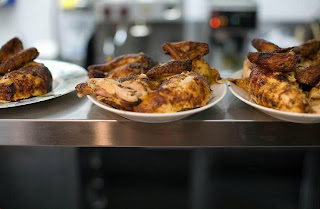 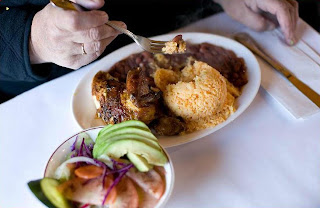 And you have to (HAVE TO) try their green sauce. My tongue, my stomach and I can’t wait for our next visit!

Enjoy and until next time, happy eating!
~Louise C.

I am Antisocial on the Networks

As far as my dedication to social networks go, MySpace got the best of me. I was younger and more involved with the social networking world back then, but today I just have a hard time maintaining my presence on social networks. I mean I'm not old yet, but I feel myself slipping away the way older people do who call Facebook ‘The Facebook’ or, as one of my friends likes to call it, ‘The Face Page’.

I just don't keep up with my page and status updates the way most people do. I don't post very often unless it has something to do with my blog, and I never really upload any recent pictures of myself or share any of my activities. Most of the photos in my profile were tagged by one of my friends and I don’t feel like sharing my every move. I just feel like I am already sharing enough of my life with my writing I don't need to give more away to the internet.

Last night I decided to take a look at the pages of some of my Facebook friends and even the most antisocial friend had more friends and more frequent status updates than I did. It became very clear that I as far as the social networking world goes, I am no longer in the cool crowd. But it's not too late for me, so I'm going to try harder to be a little more present. I just don’t have it in me to be a slave to the internet the way I used to be, but I will try.

Part of the reason I haven’t been as ‘on’ is because I spent the past year or two writing and I didn’t get to read as many books as I wanted to. I don’t read while I’m writing because I don’t want to subconsciously steal a story idea from another book and get my ass sued. So now that I have that chance I’m going to catch up on as many books as I possibly can before I buckle down and finish my next book.

I just finished The Hunger Games…LOVED IT! And am currently reading Catching Fire… so addicting!

But anyway, as I said, I’m going to try and make the effort to be more present. Even though I don’t know why, it seems important that I do.

To upgrading my social networking etiquette! 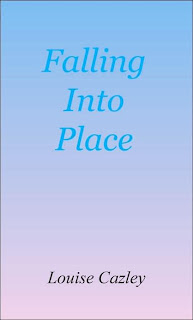 My first book, Falling into Place, is now available to download on Amazon Kindle, B&N Nook and any other e-Book downloading device that is available nowadays.

I began writing Falling into Place when I was twenty-two years old. Sitting on the steps of St. Bartholomew Church on Park Avenue, I spent my lunch hour writing random stories and poems not realizing that they all became chapters that, when stacked in the correct order, created a book.

Falling into Place is a coming of age novel depicting the deterioration of a mother–daughter relationship. In Falling into Place, Leila, the main character, struggles to rebuild herself, forgive and end the cycle that has plagued her broken family from one generation to another.

About me and the book:

Falling into Place is tooootally based on my life. My teen years were a very dark period and to write this book, I had to go back and visit those dark days to make the story feel current as I was telling it to you.

Life as a teenager is confusing enough with its roller coaster of emotions, but when you don’t receive the love and support that you need in those formative years, life can be cold and isolating.

I wrote Falling into Place partially for those in situations that might seem hopeless. I wanted to let them know that abuse doesn’t always look the way people expect it to look. Abuse isn’t always physical. Abuse is mind-twisting, emotional, verbal and painful. Abuse is egotistical, prideful, dark and ugly. Abuse cannot always be seen, but it is always stabbingly penetrating. And its effects can linger and linger and linger…

Because I was so young at the time, some people didn’t believe me when I told them what I was going through. They just assumed I was a typical teenager in my rebellious stage; but I was a good kid trying to make the best out of what seemed like an impossible situation. Sometimes the only way I could get a sliver of freedom; of release was to tell lies. I am not a liar, but I would lie just so that I could have a free moment to myself and so that I didn’t have to go home. I would sometimes sit in the staircase of my building, a few floors above my apartment, because I didn’t want to go home. Home should be your comfort and your safe haven, but that was the last place I wanted to be.

When I turned nineteen, I’d finally had enough. I packed up and left even though I didn’t know where I was going or what I was going to do. I just knew that the life I was living wasn’t normal. I was on a lock-down so intense that it left no room for me to breathe and I was tired of getting slapped around.

It was a scary, scary time; and although some of my friends didn’t believe me, or didn’t understand the extent to which my home life had gotten, they still rallied around to help me. If it wasn’t for them and for other angels who fell into my life, offering me shoulders, ears, hugs, laughter and opportunities, I don’t know what I would have done.

(deep breath to clear the choking-up-ness)

The reason I got out of that situation was because I knew that the way I lived, was no way for anyone to live. There are some cats and dogs who were treated better than the way I was treated at that time. BUT on the flip side, I am the woman I am today because of what I went through. I am a strong, compassionate, loving, decent person who has a lot of fight in her.

I’m actually a little scared to post this because no one ever wants to say bad things about their family. My family contains good people, but sometimes, there are behaviors that take place which I don’t understand and cannot agree with. My biggest hope is that the cycle ends and doesn’t trickle down into yet another generation.

I’d like to give a big thank you to those who supported, encouraged and had faith in me when Falling into Place was born.