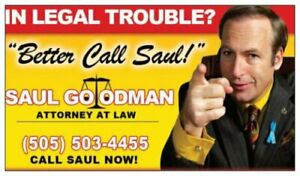 Have you ever had someone ask you a question that was phrased as a polite inquiry, but was really asked with all intentions of getting all up in your business? Or have you ever been involved in a casual conversation that you later realized was a trap set by the other party who was just waiting for the right moment to walk you into a premeditated argument? I’ve had some interesting individuals in my life…


I’m never prepared for these situations and (after the fact) I ALWAYS think of the perfect comeback for how I should have responded. Some people are blessed with the amazing gift of answer evasion, or the ability to talk themselves out of an ambush. I am not one of those people.

One of the many reasons I love Better Call Saul is because I’m so impressed by this slick-talking, sleazy, slimy lawyer. Saul Goodman can talk himself out of any impossible, sticky situation; there are a few times in my life when I could have used a lawyer like him.

Better Call Saul is a (prequel) spin-off to Breaking Bad, but you don’t need to watch one to see the other. The final season of Better Call Saul airs on Monday nights on AMC, but you can binge watch the previous four seasons on Netflix.

Side note - The phone number on the business card is actually real.#itsallgoodman
Posted by Louise Cazley at 2:02 PM