Things Beauty and Such – Body Lotion

I am obsessed with and addicted to lotion and I never leave the house without being moisturized from face to toe. I have different lotions for my face, my eyes, my body, my hands, my feet which I use in the daytime and at nighttime. I am obsessed with moisturizing myself, but today I will be focusing on body lotion.

Occasionally, I can be easily influenced when it comes to beauty tips. I say ‘occasionally’ because sometimes I just don’t listen as I feel like I know what works best for me. After watching an episode of Oprah, which featured women who aged incredibly well, (one woman in her 70’s easily passing for her late 40’s) I learned that the secret to their youthful appearance was moisturizing.

From that moment forward, I’ve slathered my body with lotion each and every time I stepped out of the shower.

I’ve always been serious about lotion, but my addiction intensified after I turned 18. With 14 years of lotion loving under my belt, I definitely have some favorites

St. Ives: Before I began my relationship with Bath & Body Works (Yes ‘relationship’ and it’s a serious one), I swore that St. Ives Cucumber Melon and Bath & Body Works Cucumber Melon lotions were one and the same. I’ve since stopped liking fruity scents, but at the time, I was cheap; okay, cheaper than I am today and I wouldn’t buy Bath & Body Works’ Cucumber Melon because it was more expensive and St’ Ives was more affordable. St. Ives is a great lotion, I just prefer the softer scents. I have the St Ives Vitamin E on my nightstand for pre-slumber hand moisturizing. (Hand moisturizing is another category of obsession for me which will be saved for a separate blog). I also love the St. Ives Swiss Vanilla and St. Ives Aloe Chamomile, but I don’t have any room for them at the moment.

AVON and Mark: I’ve been an AVON Representative for six years, and I’m proud to say, that even though AVON is a bad influence on me, I have been able to narrow my lotion purchases down to two…. Okay three. My favorites are: Mark’s Lemon Sugar Body Butter, Pumpkin Spice Hand and Body Lotion and Skin so Soft - Soft and Sensual. I never thought I would like a pumpkin scented lotion, but the scent isn’t overwhelming. I keep this lotion in my kitchen, because pumpkins belong in the kitchen.


I like SSS – Soft & Sensual because the scent is light enough that it doesn’t overpower my perfume. I used to do double moisturizing duty in the summer mixing SSS with baby oil on my arms and legs to avoid dry knees/elbows. The moisture doesn’t last all day if you use either by themselves and the added baby oil is for moisturizing insurance.

Laura Mercier: Gia and her posh friend, M. Soto invited me to be a member of Gilt Groupe, a website that sells expensive ish at discounted prices. The sales that happen on this website are stressful and to be taken seriously. The sales are so serious that I could only handle being a part of one. It stressed me out. This one sale, which began at noon, involved a Laura Mercier Crème Soufflé Sampler Set including Almond Coconut Soufflé, Crème Brulee Soufflé and French Vanilla Soufflé Body Creams.

You wouldn’t think that other people are also waiting eagerly at their computers, counting down the seconds until noon arrives, but once noon hits, you’d better add your items to the shopping cart and hit ‘checkout’, FAST! Because if you hesitate on your purchase even for a second, you will be wait listed. WAIT LISTED!! For lotion! It was too fancy for me, but not so fancy that I couldn’t spend $35 so my body could smell like soufflé when I go to bed. Was it worth the $35? Hell yes! Would I purchase it again? I won’t if I am unaware that there is sale taking place.

I hate clutter, but I’m having a hard time parting with the Laura Mercier lotion containers. I keep trying to think of how I could use them for storing…something. They will end up in the garbage one day, but for the time being, I love them.

My favorite lotions from Victoria’s Secret are from their Naturally Hydrating Collection. I love the Vanilla Sandalwood which I use at night in the wintertime. I also have the Violet & Jasmine on my bathroom sink and the Hibiscus Yumberry on the bookshelf in my hallway so that I can lotion my hands as I’m walking out the door.

Bath and Body Works: (Last, but certainly not least) I shouldn’t blame anyone else for what happened to me after I made the mistake of following Gia into a Bath and Body Works store one New Year’s Eve many years ago, on the last day of their semi-annual sale. Madness is what happened to me. Imagine someone buried by bottles and bottles of Bath and Body Works lotions and creams; rolling around in the nude giggling with insanity. That’s not what I did, but I might as well have. Rice Flower and Shea, which was discontinued AND THEN BROUGHT BACK, was my gateway Bath and Body Works Lotion. I’ve tried almost all of them, but my favorites for the summer are, White Tea Ginger, Lemongrass Sage, Cherry Blossom, and Sweet Pea. My favorite for the winter is Warm Vanilla Sugar. For some reason I like Cotton Blossom and Green Clover & Aloe as bedtime scents.

It didn’t help that my job used to be located a block away from a Bath and Body Works shop. Once we moved away from that location, I thought I would be in the clear. I really should have more control over myself. 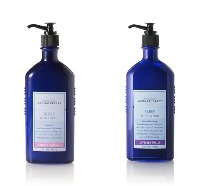 Just as I was returning to normal levels of lotion appreciation, I had the nerve to throw caution to the wind by smelling the Aromatherapy Sleep - Lavender Chamomile and Aromatherapy Sleep - Lavender Vanilla; I bought both, but my heart skipped a beat for the Lavender Vanilla so I also bought the hand soap, which I keep on my bathroom sink. I wasn’t the only one who felt a special bond with the Lavender Vanilla Hand Soap, because once I ran out, I had to go to about four different Bath and Body Works shops before I was able to find one that had it in stock.

Every time I think that my relationship with Bath and Body Works might be at its end, when I’m down to the bottom of one of their bottles of lotion, I receive a coupon in mail. A little reverse psychology to remind me that they have not forgotten about me, when all they really want is my money. And my dumb-ass always falls for it.

And there you have it. All of the lotions that I have had a relationship with at one point or another in my life. Eventually, I plan on narrowing down my favorites to a few signature selections. This is always my goal, my resolution, but then there is always one that I still haven’t tried…

Email ThisBlogThis!Share to TwitterShare to FacebookShare to Pinterest
Labels: Random Writings, Things Beauty and Such