Although it couldn’t be further from the truth for some, people who have cats are associated with knitting, hoarding and having cobwebs on their vaginas; because if you have a cat you couldn't possibly have a man. And if you are a man with a cat, then you certainly have a vagina where your penis should be.

Dog owners are associated with coolness, couples and children that were created from said ‘cool couple’ engaging in sexual activity that cat owners don’t engage in.
The only reason I ended up watching the show is because of Edward and his channel surfing habit. “Weezy!” he called from the living room, “You need to watch this. You could learn a few things to help the fat cat.” I gave him a dirty look as I sat down (she’s not fat, she’s just…curvy).

After watching a few episodes, I actually learned so much that I ended up making a list for Baibe who I thought was a hopeless cause in some areas. (For those of you who aren't familiar with Baibe, she’s my cat and my first born child, even though I wasn’t the one who gave birth to her.)

The first item on my list was Buy Baibe Teaser Toy. 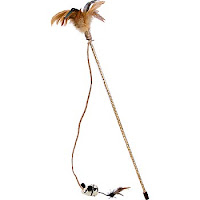 In every single episode the host Jackson solved most of the cat’s issues with this magic toy. It brought guards down and created bonds between humans and antisocial cats; and Baibe can be extremely antisocial.

It served as an exercise and weight lose mechanism; and Baibe needs to lose weight. When you are active, you look and feel better about your life and yourself. Exercise releases endorphins, which serves for a happier person... and apparently serves for a happier cat. Also cats are hunters and this toy enables Baibe to do what she was meant to be doing instead of lounging on the couch all day.

This toy can also be used to distract Baibe and coax her out of her hallway spot so that my guests can get to the bathroom without fearing for their lives.

I went to the pet store in my neighborhood and bought the toy the first chance I had.

Baibe was lounging on the couch when I got home but the second I waved the teaser in front of her, her response was immediate (as it was with every single cat on the show).

My video skills aren’t as good in the first video, but you can still see the activity.


(Please excuse the messy wires in the background.)

The latter video was her second wind, which is why she's taking breaks in between, even so, I haven't seen Baibe move like that in quite some time... and it's my fault. I'm really sorry that I didn't know about this toy and its benefits sooner. Baibe and I will be using this toy everyday as Baibe could stand to lose at least three - five pounds.

Which brings me to the second item on my list: Put Baibe on a Feeding Schedule. On the weekends I like to sleep in and I don't want her waking me up so I leave her extra food. I refuse to have a cat dictate my sleeping schedule, but maybe this will prove to me that she really doesn’t eat as much I think she does. , the host and miracle worker of ‘My Cat From Hell’ informed me (yes, he was talking to me) that cats aren’t grazers so she only needs to eat twice a day. Once in the morning and once at night.

The third item on my list is Buy a Lounge Scratcher. 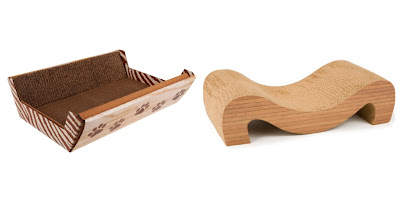 Baibe has a scratcher but I learned that it isn't wide enough for her. I need to buy one that is more inviting. She is pretty good about not scratching the furniture but every once in a while she does. Since I know that she's loves to put herself into boxes, I know that she will love the lounge scratcher.

The last item on my list is Brush Her. I didn't see this on the show but it's something I am bad at keeping up with and it's something she needs me to do to prevent her from getting hair balls.

I was so relieved after watching the show because, although my cat is a little crazy, she wasn't as crazy as any of the cats on that show, yet Jackson was able to reform all of them in as little as two weeks. Phew! Baibe, there is hope for you yet.
The true test will be to see if the bonding exercises work with someone who is not me or Edward.
Baibe will be ten this year, so here’s hoping that these changes will add years to her life.