Last year, as I was leaving for work one morning, I dropped my keys down the elevator shaft in my building. When I called building management, they informed me that it would cost $56 to get them fished out and returned to me; AND that I could only pick them up during the hours of 9am - 5pm, Monday - Friday... or something like that. I have a job during those days and hours, so I bid my keys goodbye, thanked God that Edward could let me in and that I had a spare set inside my apartment somewhere.

But today when I walked into my building lobby, I saw theeeesssse!!... 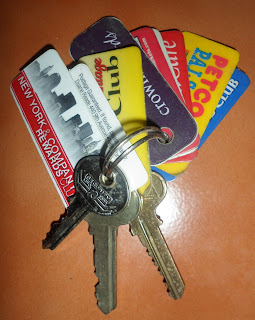 They are a little rusty and beat up, but I recognized them right away. I guess someone else in the building has clumsy problems too because there were another set of keys next to mine.

This really isn't blog worthy, but I'm thankful that I didn't have to pay $56 to get my keys back and thankful that I live in a building where keys can be left in the lobby and your neighbors can be trusted. All it takes is one person with too much time on their hands, to figure out which door the keys belong to.