To Puerto Rico and Back

I planned a vacation by myself because I got tired of waiting for people’s schedules to match up with mine. I am young and I only live once, and I can’t wait for others to be ready for the things that I want to do with my life. I take pride in the fact that I like to do things by myself, but going to Puerto Rico alone was scary.

The week before I left I got really worried and I didn’t discuss my trip with anyone because talking about it stressed me out. People knew I was going, they just didn’t remember when and I didn’t remind them. I asked myself why the hell I subject me to four days alone with me. When Sunday comes, I’m usually antsy to get back to work. So why was I sending myself to a place I had never been to, to sit there and do what, by myself? Why didn’t I schedule my return time for the morning instead of the evening? Why did I do this to myself?!

When the plane took off from JFK, I got really chocked up and tried my best to hide the fat tears that escaped me trying to emotionally pull myself together. 'I am a big girl! I am a big girl!', I told myself. As long as the plane got to where it was supposed to go safely, I would be fine.

When the plane landed and I walked into the airport, I felt the way I should have felt in the first place. Ecstatic, proud. I couldn’t believe I was actually in Puerto Rico by myself. I walked out of the airport to catch a taxi and the humid, Puerto Rican air enveloped me soaking into my clothes (I still had my hooded sweatshirt on). At that moment I knew I was going to love it there. Humid and beach are two of my favorite things on vacation.

My vacation started off RIGHT with a $12 cab ride to my hotel, the Courtyard by Marriot, Isla Verde Beach Resort. I arrived a few hours earlier than check-in time, but my room was ready. Nice! I dropped off my luggage, snapped a few photos of my room (because I’ve always loved home décor) and the view of the beach from my balcony and made my way to Denny’s to have breakfast. I understand that Denny’s is not Puerto Rican food, but it was cheap and I love breakfast, so there! 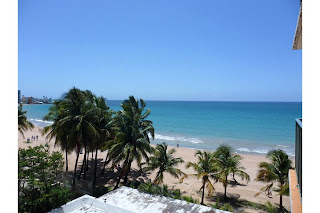 At Denny’s I experienced the first joy of traveling by myself. There was no one there to judge how I eat. I love food and I like to taste all the flavors of my food at once. Eggs and harsh browns on my fork in my right hand, and my bacon in my left hand. Both of my hands work together to make my taste buds happy.

When I went to pay for my food, one of four young guys, also waiting to pay, looked at me and asked, “You’re here by yourself?!”

My heart skipped a beat when I asked the waiter where the Walgreens I had Googled was and realized it was right next to Denny’s. I always scout out the pharmacies when I go on vacation. Things are just cheaper and more accessible at one of the chain pharmacies. I bought a gallon of water and a bag of Cheetos and figured out where to walk back to my hotel from Denny’s on the beach.

The rest of my vacation consisted of more Denny’s, lots of beach time either swinging in one of the hammocks that lined the beach outside of the hotel or sitting on the shore allowing the warm waves to roll over the lower half of my body (I can’t swim so sitting on the shore was as far as I was going into the ocean.)

The hotel won me over with the happy hour at the pool swim-up bar. I never understood why hotels keep their pool water so cold that you have to work your way in, but not this hotel. I didn’t think I was going to get into the pool at all, but after I dipped my foot into the water to test the temperature, I found myself seated on one of the inner-pool barstools swinging my legs in the comfortable water. The drinks were $3 from 3pm – 5pm at the poolside bar, Papayas, and then from 5pm – 7pm there was a $3 happy hour at Picante in the hotel lobby where you could get your drinks and sip them in the pool area. I only took advantage of one happy hour or the other, not both. I wasn’t trying to get sloppy out there by myself.

At the poolside bar is where I met and connected with some really great people. The first day I met a very glamorous woman who was on vacation from Dubai with her family. Her mom, her husband and her 18 month old little boy. She was originally a New Yorker and she was a Latina. I had a great conversation with her and I was fascinated that she was a Latina who lived in Dubai, but people do travel. She told me that traveling was the reason that she and her husband decided to only have one child. As I played with her baby, she gave me the low down about the hotel and what I should do while on vacation. She told me that she and her family always stayed at the Courtyard by Marriott hotel because it felt like they are on a private island. I had to agree.

In the evening, rain came down heavily as the sun set, but it was still shining. And the sky blessed us with the arch of a rainbow. 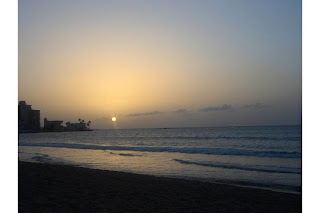 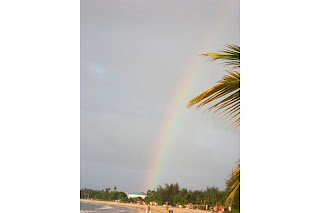 That night, because I was scared to leave the hotel, I ate in the hotel lobby. I ordered a chicken quesadilla and it was not good. Not bad, but not good, so I made a promise to myself that I wouldn’t eat at the hotel again.

That night and the next morning I experience the second joy of traveling by myself. There was no one’s deadline that I had to meet but my own. I went to sleep when I wanted and I didn’t feel pressured to stay awake past my bedtime due to someone who wanted to break night. And when I woke up, I was free to lay in the bed until I wanted to get up. I didn’t have to wake up and rush because I was on someone else’s schedule. It was relaxing to do things at my own pace.

On my second day, I met a girl from Brooklyn at the same place, the poolside bar. We clicked instantly and found out that we had a lot of things in common. It was as if we were meant to meet. Because of her, I was able to see more of the area because we ventured out beyond the hotel grounds together, which is something that neither of us would have done being that we were both on vacation by ourselves. Meeting her made my vacation perfect, because as she said, “We still have our alone time, but we see enough of each other to break up the monotony of the trip.” I am so glad that I met her.

I had booked an Old San Juan/ New San Juan tour for the third day of my trip, but the night before the tour, I was told that it would be cancelled and my money refunded, which was such a blessing in disguise because there was a friend of a friend who lived in Puerto Rico only 15 minutes from where I was staying, and she wanted to take me site seeing in Old San Juan.

So on my third day, I met up with the friend of a friend and she took me to Old San Juan. I tried to contain myself as I became possessed by the beauty and the architecture of the city and went crazy with my camera. The images I captured are breathtaking and I am so grateful to that poor woman who walked high and low throughout the city with me and then bought me a yummy lunch of chuletas, arroz con habichuelas, y maduros (Pork chops, rice and beans and sweet plantains). Damn that just made my stomach growl.

In Old San Juan, I experienced the third joy of traveling by myself, even though this time I wasn’t really alone, just with someone who was patient. I was free to capture as many photos as I wanted to take without someone complaining that I was wasting time taking too many pictures. One thing I realized while I was taking pictures, is to look behind you. Some of the best photographic opportunities are after you've walked away from an area. When you turn around, you can capture your memories at a different angle giving you a completely different photo. 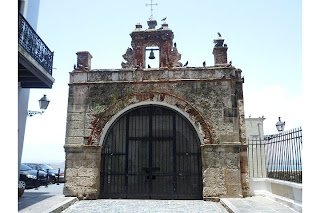 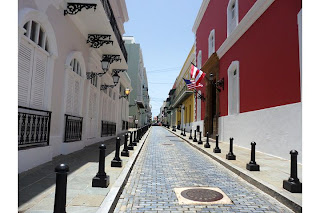 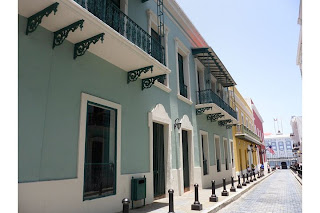 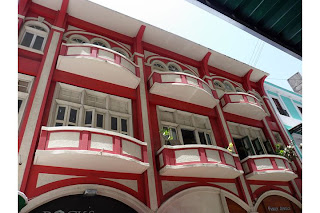 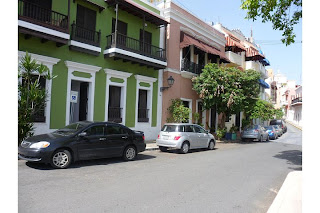 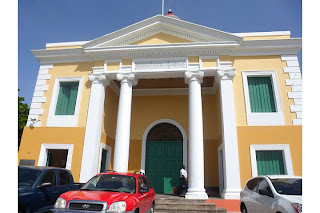 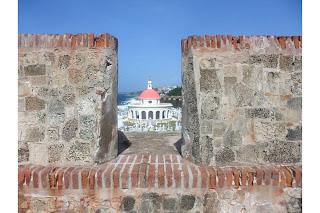 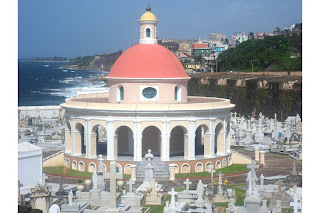 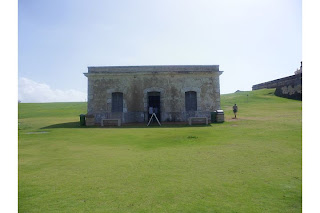 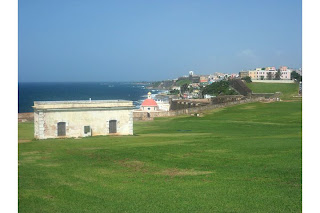 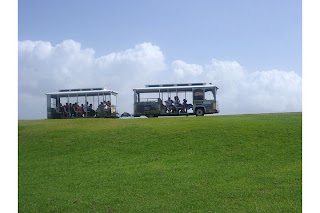 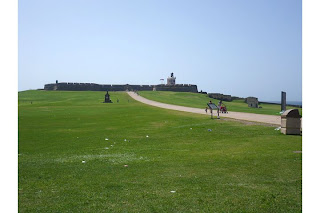 I recognized the bus in Old San Juan that stops outside of my hotel and at the end of my pro bono site seeing tour, I hugged my tour guide and for $.75 cents, I blended in with the locals and found my way back to my hotel.

On my last day, after having breakfast at Denny’s, I checked out of my room and I sat on the beach from noon until 3pm when the poolside happy hour began. This time, I met a fun group of people from Queens and Newburgh, NY. Maybe my New York pheromones were polluting the air around me attracting only those who had lived in New York at one time or another. It made me feel at home. One gentleman of the group kept humorously telling me to call the airline and change my flight so that I could hang out with them. One of the women in the group became my time keeper so that I didn’t miss my flight. The other gentleman informed me that there was a festival taking place at midnight and that everyone would be on the beach at that time.

I couldn’t believe that I felt this way, but I didn’t want to leave. I wasn’t bored at all even though I thought I would be. I really wanted to stay and hang out with these people I’d just met or even by myself. I was sorry that I had only booked my vacation for four days instead of five, or seven or forever…

I remember an old coworker saying that he wished he could just quit his corporate job and open up a business selling drinks on the beach in Puerto Rico. I get it. Beach life is the only way life should be.

After my flight was delayed an hour (an hour of which I could have spent sitting in the pool instead of sitting in the airport) I made it back home safely and I feel silly for being worried that I wouldn’t have a good time in the first place. I met great people, I ate good food and I showed myself that I don’t need anyone else to live my life. To me, life is living and sharing it with other people, but sometimes that can’t happen, and you shouldn’t stop living, because other’s can’t ‘live’ with you.

Now, on to the next vacation….With or without you!