About Marc and me: Marc is more than a friend, he’s my little brother. I met Marc I was ten years old, in January of 1989, after he burst out of our mother’s womb and joined our family. Before Marc came into the picture, I was an only child, but I’d always wanted a sibling. Now that I had a sibling it took me some time to adjust to having a toddler around. Once Marc learned how to walk he took to exploring his surroundings and sometimes, due to his curiosity, items of mine would end up in the toilet or out the window. I didn’t find this as humorous as my mom did, who told me that if I didn’t want Marc to get a hold of my items, to keep my room clean and keep things out of his reach. Did I listen? No.

I had an incomplete sewing project where I’d wrapped the thread around and stuck the sewing needle into the fabric. My sewing project ended up on the floor, Marc walked into my room and the needle ended up going into his foot. I felt terrible and cried all the way to the hospital in the ambulance, because it was my fault that we were our way to the hospital in the first place. Marc has since forgiven me for being the cause of such a traumatic injury.

That story is about fifty years old, but it’s what came to mind when I started writing about Marc. 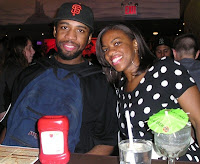 Marc is special to me because he is my first sibling. What I like about Marc is that he has this cool, roll of your shoulders attitude about himself. I can be pretty high strung at times, so this is a personality trait that I wish I had. I also love Marc’s intelligence. Instead of getting his information from surfing the internet, which I’m sure he does occasionally, Marc gets his information and news the old fashioned way, by reading the newspaper everyday. Anyone can read the newspaper everyday, but due to the instant gratification of this technological age that we live in, most young people don’t. I don’t even read the paper at all. So kudos to my bro for keeping it old school.

Another thing I love about Marc is the confidence and belief he has in himself and the positive things he is doing with his self-assurance.

One Saturday, Marc invited me to Harvest Center Ministries were he would be performing. I didn’t doubt my brother’s talent, but his performances blew me away. He was AMAZING!! I can write, but I couldn’t construct a song and put it together. I probably could if I really tried, but Marc doesn’t have to try. He writes all of his lyrics by himself. His lyrics are all positive words glorifying God and spreading His word. In his songs, Marc combines current events with God’s message and I believe that his delivery will go a long way and reach many people. I am so, so proud of him!! 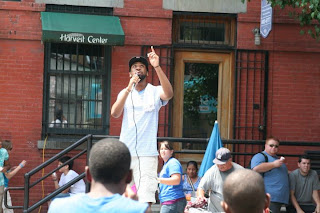 Who is Marc Cazley? I am a Rapper, Singer, Song Writer and I write Christian songs for myself as well as for others. (He's also an artist, as in he can draw and he has a good eye for photography. But this is about his music, so I'll get back to the questions.)

When did song writing become important to you? I've been writing rap songs since I was about eight-years-old. I wrote a lot of songs as I got older. Finally when I was the age of like fourteen or fifteen-years-old, I started rapping in the projects with my church. We would go out in the summertime to different projects and reach out to the youth in the Mott Haven area of the Bronx . When I would rap in these places to audiences that didn't necessarily agree with my beliefs, I still had awesome feedback! So many people told me that I was the “Best Christian rapper” that they ever heard. And then there were other times when I would be walking past the same project buildings weeks later and there was kids who would come up to me and start singing my choruses or reciting my lyrics! I was shocked to say the least, but the good thing is... I never became cocky or let it get to my head! But I would have to say I think that was the point in my life. That I knew what God wanted me to do.

Has it been an easy or difficult road to follow your passion? It has been difficult at times! Definitely! There have been periods of my life where I was doing things totally the opposite of what I knew that I was called to do… Times when I was doing some horrible things! That's a whole ‘nother story in itself (ha-ha). But once, I cleared myself of all the extra-curricular foolishness, that made the road a whole lot easier!

What / who inspires you? First I'm gonna say this and I know it's gonna sound corny to some - but first and foremost, I would have to say “God” inspires my music! He's the one who blessed me with the talent, he's the one who puts the lyrics in my head and helps them flow from the pen and into my performances! But as far as artists who inspires me, I would have to say Christian Rap artists, ‘Ambassador’, ‘Da’ Truth’ and ‘Flame’ are probably the ones who most inspire me to keep my finger on the "Go Button ".

Marc’s last words: Right now my songs can be found on You Tube under MC “No In The Middle”. I have other songs like MC "God of Creation" and "Quick Hitters" on there as well. Enjoy them and share them. I'm just warming up!

Here are two of Marc’s songs:

Marc, I am so proud of the young man you have grown to be and what you are doing with your life. Keep doing what you do! I wish you the very best in each and every avenue you take to share God’s word. Remember – You can do all things, through Christ who strengthens you.

Email ThisBlogThis!Share to TwitterShare to FacebookShare to Pinterest
Labels: Friends with Benefits